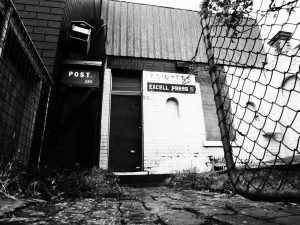 In March, 2017, Ray, the owner of Excell Press, officially retired after fifty years. Keen to talk, we stepped inside his small Brunswick factory just down the road from Upshop, just as a storm began and the deafening sound of the rain on the roof made it impossible to hear. But that didn’t seem to matter. Ray’s nimble fingers were already showing us how to conjure up words as if by magic. Ray asked Leonie to spell her name. His fingers found each letter without even looking and there it was, E.I.N.O.E.L in typeface – but back to front and upside down as it should by in the land of typesetting. 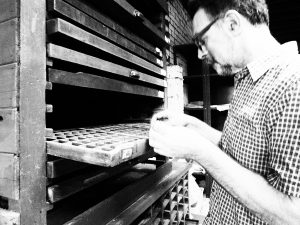 After we had touched so many of the tiny letters, Ray showed us the machines: the huge guillotine with its large pedal worn from decades of contact with Ray’s right foot; and  the treadle printing press that requires the efforts of a human operator. Ray – this 88 year old  with knees no longer as stable as they once were – could still make it work and all we could do was watch him, amazed.

The “Original Heidelberg”, the workhorse of the shop, was last. Ray had just just printed his final job: a label for a small futon business who had been a client for many years. Ray flipped the switch. As there was still sufficient ink on the pads, a gate full of typeface and furniture, and enough of the special powder that is puffed onto each sheet to dry the ink after the letters are printed, more magic happened.

Stuff seems to find its way into a life, embedding itself into nooks and crannies. And when it’s salvaged, saved so that it can live a little longer, stuff becomes renewed with potential, a medium once again for learning more about materials and methods. Fingers have been blackened by sorting through tiny, precious, metal letters, words  constructed, and a printing method improvised. Ink the color of violet has been dribbled over a canvas, and scraped onto cartridge paper.

A tray of 24pt Roman bold typeface has provided the means to create labels for an exhibition. Letters have been transported to the seashore, and keep company with tiny ceramic pots and feathers in an old miner’s cottage in Castlemaine.  Hours have been spent experimenting with bond paper, once used as backing paper for manual typewriters; A2 cartridge, all creased and marked; parchment and leathercraft paper, already heavily textured; and 15 sheets of 300gms with a metallic gold finish so that an imaginary world created from forgotten things could be exhibited six months after Ray gifted us his material in Art in Public Places.

What Ray gifted was more than typeset and paper; the stuff of his life has found its way into the lives of others and their creative processes. But what of those marvelous machines? What was their next life?

In the months that followed our visit to Ray, Upshop searched for an answer. Finding solutions to the transportation and storage of this heavy machinery proved difficult.  Eventually Rob Eales stepped up and, with perseverance and passion, we worked together to transport the letterpresses to a new location in Brunswick.

Instead of going to landfill, these machines live on at Commoners Press  a local startup print studio that works with artists and designers on printing projects that are community-focused, experimental, sustainable and/or support regenerative practices.